Home / Uncategorized / Differential of inertia, the i ...

Differential of inertia, the importance of pulling under the bar

On: May 12Author: ndouganCategories: Uncategorized No Comments 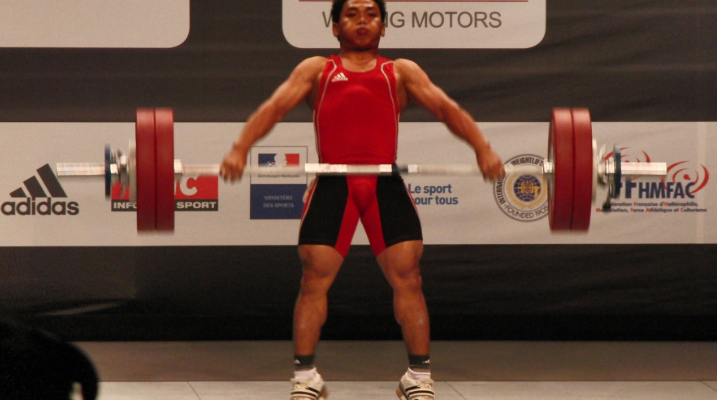 This one is a topic for the physics lovers and those like myself who have spent far too much time thinking about the Olympic lifts, their movements and just what exactly is happening during a lift.

Let me just start off by stating that this article is a little bit of the science behind an often overlooked area, getting into that lovely full squat position and catching a lift under the bar.

Often times coaches, S&C instructors and even athletes are really caught up in the triple extension, getting the bar high enough to snatch or clean. This in itself is great, getting that powerful pull is absolutely crucial to a good lift, max weights and proper form; but it’s not where the exercise ends.

If you’ve been at any of the coaching courses with me as a tutor you’ve probably heard me asking the question, “at what point does the lift finish” the vast majority of the time the answer I hear, is when the athlete is at rest with the bar overhead. For those same people I say what about practicing correctly setting it down and getting twice the amount of work from your lifts, but that’s for another article.

At this point of triple extension, a lot of beginner athletes take the foot off the gas, they think the hard work is done and drop under the bar, floating eloquently into a nice stable position with a comfortable weight.

I call Shenanigans…there’s so much more to be done… your lift isn’t finished yet!

I can almost hear the coaching cries [read excuses] ring out now; Hell we’re doing it for sport, we want good sprints, the triple extension is the most important part… and yes, for power generation that’s true.

Take this picture for example… lovely triple extension on the left leg – Hip, knee and ankle all opened out to drive powerfully and accelerate…

Now look closer, the right leg is in triple flexion. Toe in dorsiflexion, hip flexor and hamstring all in concentric contraction. Both actions need to be performed fluidly, at speed and with as little lost effort as possible to maximise acceleration.

Nobody sprints with two straight legs after two steps, the sharp contraction of the iliopsoas (hip flexor) mimicked by the squat position, having received the bar, is essential for quick turn around and reutilisation of the limb, it is the second amortisation phase, the second stretch shortening powerful fast movement that is replicated time and again on the pitch, field, track, and yes… in the gym. Weightlifters, for you it’s actually just as, if not more important. If it’s not working at 100%, then nor are you. That 100kg snatch you were looking for when 95 sails into place… that’s only 5% guys and girls, it’s time to get efficient, it’s time to lift big.

This action, of getting quickly under the bar is where the physics comes into play. I use the physics because it so beautifully sums up why it is so important to actively pull under a bar rather than drop or flop; after all it’s the law… so it’s time to dust off the lifting shoes, it’s time to take on physics, and one of the biggest hurdles we face as lifters… Gravity.

The efficient lifter instinctively knows when to use gravity to their advantage; we’ll accelerate from standstill towards earth at 9.81 m/s², but why wait?

Here at the 2011 world championships, we can see how little movement there is in the bar after the triple extension, but it still moves… it is moving under it’s own momentum at this stage, frame 3 shows the feet off the floor, therefore nothing to pull against to add height but empty space; or is there?

As Jennifer Aniston once said, here comes the science…

The athlete is moving upwards, driving themselves up and taking the bar along for the ride, accelerating to max velocity a la frame 1. – They now have velocity… to make it simple but roughly accurate, lets call it 2m/s.

When calculating the change in inertia, or impulse Mv-Mu would be different for pulling under the bar, than an object at rest. Basically letting gravity do the work for you, slowing you to a stop, then accelerating you towards earth at 9.81ms² takes too long; bearing in mind… gravity’s doing this to the bar as well, the idea is to be under that bar when it starts plummeting to the ground.

The main difference here is the time it takes to get under the bar, which is directly affected by how much force you put into pulling under the bar once those toes of yours get a sniff of hang time leaving the floor.

In the above frames, they are shot at 60 frames per second which means that it takes 4 frames to get from [V] to [U] which is 0.07 seconds to get under the bar… trust me when I say, this guy was really frickin quick

So if there is space under your feet, and only air around you, what exactly do you have to pull against? – the only object left is the bar.

The bar is travelling upwards under its own momentum at this stage, so what you in fact do by pulling against it is transfer your upward momentum [V] into the bar, increasing it’s velocity, reducing your own by creating downward impulse in your body. This gets the 2m/s speed under the bar or final velocity [U]

The harder you pull, the faster you decelerate, and therefore transfer more force, and upward momentum into the bar as a result. This is the differential of inertia – you defer your inertia into the bar by actively pulling against it like it was nailed to the damn floor. When those deodorant ads said men can’t help acting on impulse, I wonder if they knew the secret to epic lifts…

This means you accelerate down under the bar quicker, take less time to do it, and there is more upward force going into the bar as a result. All of which means… heavier weights!

Just in case there’s a few thinking… I’ve done the analysis, I have the figures: The bar doesn’t get any quicker after triple extension. This is true, but it will decelerate slower with an athlete pulling under the bar, the actual upward momentum gained by the bar during pull under is very minimal.

In any case, the bar is not what’s important in this equation, but the speed of the lifter, if they are under the bar much sooner, the bar has less time to come to rest and head earthbound under gravity, which means the lifter has a much better chance of snatching or cleaning that weight.

There is also an added benefit to this, the psychological one gained by teaching that this is an active part of lifting rather than an addendum to a clean or a snatch.

When the athlete has to focus on actively pulling under the bar then they’re more engaged, less relaxed and just that little bit sharper when it comes to performing the movements.

The action of pulling under the bar, even the language used, lets the lifter know that they are expected to maintain form, continue to lift until the bar is overhead, and not simply coast after Vmax/triple extension.

There are no thoughts of relaxation, or lesser effort, max effort must be maintained until the bar is secured overhead and successfully recovered.

This translates to faster athletes under the bar, more powerful contractions at the hips (great for sprinters and getting those muscles up to standard for good running mechanics) and more weight being lifted due to the increased efficiency of the lifter.

This minimises the distance the bar drops, lowering the force transferred into the lifter when it is caught as it is moving slower, and allows the lifter to again lift heavier as a result.

So why overlook this one small aspect when even small percentages play such a massive role at the high end of lifting.

The less scientific explanations is simply this;

The harder you pull under the bar once the feet leave the floor, the quicker your momentum is transferred into it, with more force, which gets you under the bar quicker, into a stronger position [psychological effect], and even has the added benefit of scraping that little bit of extra height into the bar.

No matter what way you look at it, the bar will be higher when you catch it, you’ll be under it quicker and therefore able to do heavier weights as a result.

← Response to: 5 moves you should avoid at the gym.
→ Why I’m proud to lift like a girl