Technique happens in the training room, not the competition platform 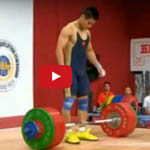 it’s been a long time, but I’ve finally gotten back behind the keyboard and a little bit of extra time to empty my brain into the webosphere.

Today’s a quick insight to the perils of studying weightlifting through social media and the educational wonder/nightmare that is Youtube.

I already feel like I sound like an old man saying this, some would say I am, but I digress… the main point is not that the videos etc. on social media are bad, or in any way unrealistic; for the most part they’re pretty accurate.

There are videos that are completely ridiculous, and frankly technique that should only be on camera in the form of a blooper reel, but for this segment, i’m going to focus solely on the analysis of competitive weightlifters, top class performers at their sport; away from the weekend workout warriors or text book only teachers.

What is misleading when using top class performers; is basing technical analysis from a 1RM attempt. The weights seen on the platform are the ones used to win, the top end of an athlete’s ability; Ask yourself the question, how good is your technique above 95% of your best weights?

Only the absolute pinnacle of performance athletes maintain really good technique to their maximal lifts.These individuals are the exception to the rule, those that are truly great at their art; beyond which us mere mortals can hope or even strive to attain.

Lu Xiaojun, has impeccable technique, rarely flinching, and rarer still missing. He is one of the greatest examples of technical proficiency, skill mastery and consistency that the sport has ever seen; he is unfortunately in the significant minority.

This kind of consistency is the weightlifting equivalent of a blue moon, it happens so rarely and only a handful of generations will ever witness it.

That said, excellent technique, examples of movements worth study are abundant, most who wish to learn from, study and analyse these same athletes are simply looking in the wrong place.

How do the athletes prepare for competition, where is technique borne, honed and practiced at its absolute best?

The answer – The training hall, the warmup room. This small dark annex, mere feet from the biggest stage an athlete will ever grace; this is where analytical cameras should point. The awesome spectacle of the biggest weights on an Olympic stage, so fluidly moved by the best at their game is a sight for spectators, awe inspiring, motivating, and the end result of decisions made and battles won and lost in the training halls throughout years of hard training, sacrifice and physical and mental endurance.

There are countless videos analysing technique, studies and theories on movement skills, biomechanics, and even technical analysis taught, based on principles used when evaluating the technique of top class performers; all when their skill is performed at its absolute worst.

Move away from the lure of the spotlight and isolation of the main stage, cast your gaze, and your lens into the back room. The 50%’s the 75%’s 80%’s & 90%’s. The skill sharpening, Light loading and technical perfection of lifters doing what they do best. Smooth, but challenging weights that sail effortlessly, sub maximal attempts where every fibre of the body is working in unison, and before the weak link in a lifters strength or ability rears its head.

This is where the camera will capture the single best source of visual information. This is where those wishing to truly understand what it takes to lift, what it means to even be selected for the event, a competitor, a contender, can see the fluidity, skill and art that lifters strive for years to achieve.

The lessons learned may only be one small part of what it takes to lift, but when you watch it, when you see what lifters go through in the training hall, when skill, sharpness and proficiency are still on their agenda;

You see weightlifting at its purest, before the yearning, and overpowering desire to grab hold of a bar and rip its head off takes hold, and the physical and mental preparation of a lifter is tested to the limit.

There really is only one place to study technique, at the place it occurs at its absolute best. That only happens before the big stage, before the hot burning lights, and more often than not, before the audience ever knows you were even there…

← Why I’m proud to lift like a girl
→ Skill Training